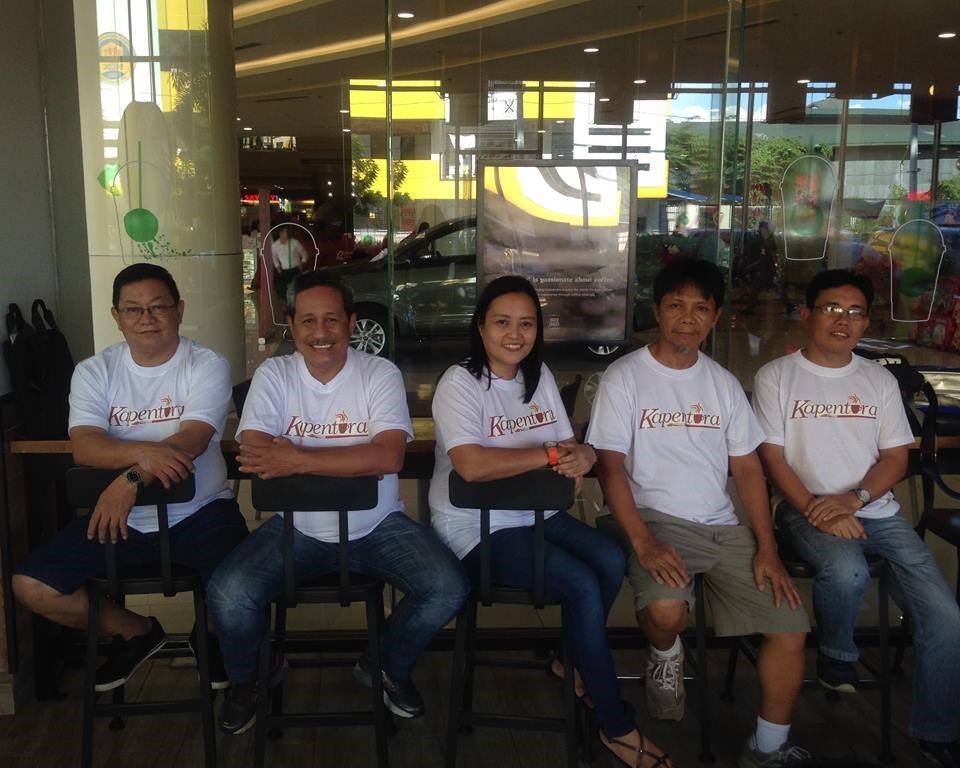 Helen Dimaya-Amladi, Fidelis Balagtas-Belda, Nemencio Macapugay, Arnaldo Mirasol, Danny Pangan, Josefino Rodriguez, and April Gamboa-Villacorta, all members of the Kapentura Art Group, will unveil on August 1 their first exhibit in the United States, at the Philippine Center in New York. The members of the art group coined that name (Kape + Pintura) for themselves because they invariably hold their weekly Monday meetings in a coffee shop inside a mall in Malolos, Bulacan. The exhibit will showcase all things Philippines, like Spanish-era houses, ethnic musicians, Philippine flora and fauna, and Philippine scenery painted en plein air. Kapentura held their first group art exhibit at the Bonifacio Global City, and does regular on-the-spot painting sessions on a farm in Barangay Dakila, in Malolos City.

Helen Dimaya-Amladi took up Fine arts, major in Advertising at the University of the East School of Music and Fine Arts. She also studied at the Philippine School of Interior Design (PSID). Her diploma at the PSID stood her in good stead here, when she opened her own interior design firm that specializes in  furniture design, and later on in the United States where she did restoration work on old buildings and interior-designed private homes. Helen is a well-rounded person. She is not only an art professional, but also operates her own Daycare business after finishing a course on Early Childhood Development. She had worked in finance and even as secretary and liaison officer for several generals in the Philippines during the Marcos regime. Helen was pulled into painting again when she associated with Filipino painters exhibiting in New York City. She found her niche in plein air painting, finding great joy in transferring on the spot onto canvas the scenery of New Jersey and nearby states. Helen’s passion for outdoor painting bore fruit last year when she won in the En Plein Air Easton Quick Draw – a competition sponsored by the Chesapeake Art Gallery and the Avalon Foundation. 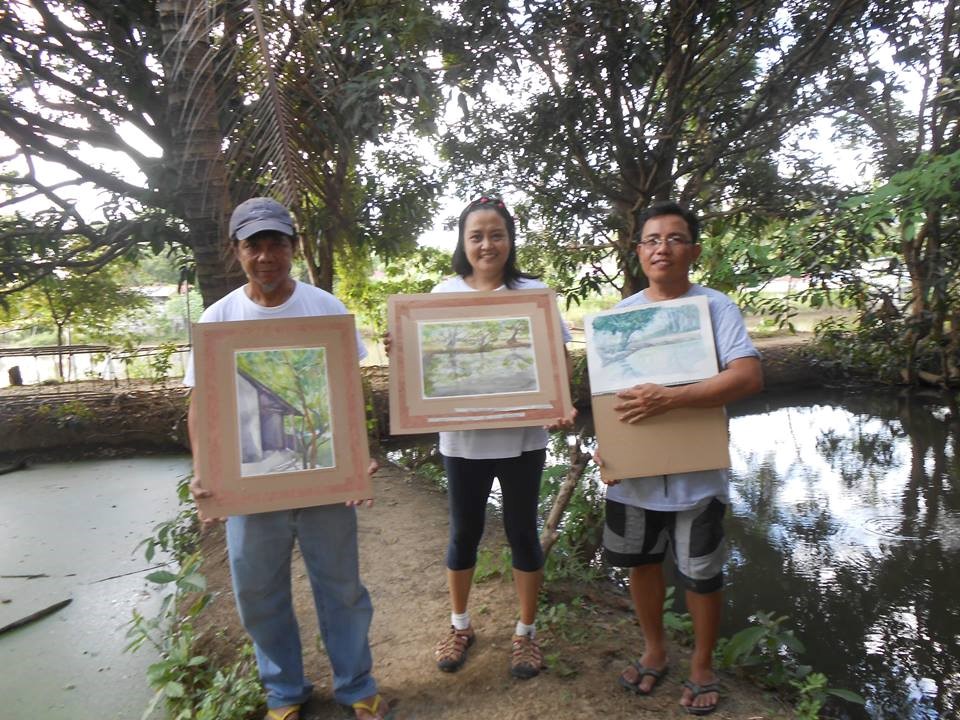 Fidelis Balagtas-Belda earned her Bachelor of Music degree major in Piano and minor in Voice from the Centro Escolar University’s Conservatory of Music.  She took further studies in Violin and Voice Concentration in the University of the Philippines-Diliman. Although she had an inkling of her artistic talent even when still young, Des (as she is called by close friends) only recently decided to devote much of her time to painting. But she did it with a vengeance, one must say – because she has become very prolific. She is capable of turning out in a day several watercolors of her favorite subjects, which are flowers, pets, and rustic scenery. Des also teaches music in a private school in Malolos, Bulacan, and also tutors students interested in playing the piano at her home.

Nemencio Macapugay is another Kapentura member who mixes music with painting. He studied at the UP Conservatory of Music, where he majored in violin and guitar. Prior to enrolling at the UP Conservatory, Macapugay had also entertained the idea of enrolling in Fine Arts, because he knew early on that he also has an aptitude for the visual arts. But music won, perhaps partly because of the influence of his father who was a musician. Although, he chose music as his profession, Macapugay also found the chance to satisfy his artistic cravings when he worked as comics’ illustrator for several years. His favorite medium is watercolor, which he masterfully uses in his paintings of Filipino tribal women and men playing ethnic musical instruments. Macapugay had exhibited this outstanding collection in Canada. Nowadays, aside from painting full time, Macapugay also teaches the playing of the musical instruments he mastered.

Arnaldo Mirasol studied at the University of Santo Tomas and the University of the East. He majored in painting in both schools. His first job was as editorial cartoonist for different Manila newspapers like the People’s Journal, Ang Bagong Masa, and We Forum. He next worked as textbook illustrator for various educational book publishers, a job which paved the way for him to eventually do full-color fairy tales illustration for Tahanan Books. He showed the illustrations he did for the books on the fairy tales of Hans Christian Andersen and the Brothers Grimm in two successful solo-exhibitions at the Crucible Gallery. Mirasol now paints full-time, and is trying to gather works for another solo show at the Crucible.

Danny Pangan had shown his works many times in solo and group art exhibits both in the Philippines and abroad. He was a recipient of many awards, the latest and most prestigious of which, was the Gawad Bayani at Bituin para sa Sining Biswal (Hero and Star Award for the Visual Arts) awarded him by the City of Malolos. A Fine Arts graduate from the University of the East, Pangan had made a name for himself by doing countless renditions of vintage houses and colonial churches as seen through three-dimensional windows. The artworks he’ll show in New York will differ in one respect from the artworks he used to do in the past. Whereas his old artworks have wood-carved floral motifs integrated into them, his new series has none. They are all two-dimensional – paintings rendered purely in paint, without the okir-like wood reliefs that make one ambivalent on whether to classify them as paintings or relief sculptures.

Josefino Simbulan Rodriguez studied at the University of Santo Tomas College of Architecture and Fine Arts. He also majored in painting. Rodriguez had attended the weekly sketching sessions of the Saturday Group during its very early years, alongside the august company of senior painters who are now National Artists. He put to good use the skill he had learned sketching with the group when he worked as artist illustrator at the Ethnology Division of the National Museum beginning 1983. His stint at the museum was made memorable when he got to scuba-dived with the group of French underwater archaeologist Franck Goddio, who was then excavating the wreck of the British trading ship Griffin. He next worked as Art Coordinator at the Vietnamese refugee camp in Morong, Bataan, conducting art workshops for English teachers and Vietnamese volunteers. Rodriguez is now into painting full time. He had exhibited extensively in the United States. most of them in New York, where he showed paintings that depict scenes typically Filipino, like the bayanihan, bunong-braso, the playing of card games like pangginggi, and the beer house habitue. 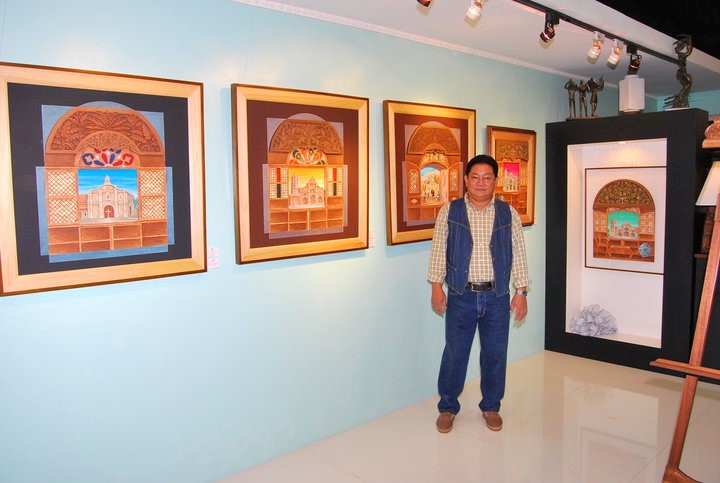 April Gamboa-Villacorta is an alumna of the University of Santo Tomas, where she majored in Painting. Right after school in 1981, she became an artist illustrator of the National Museum of the Philippines. April was encouraged to hold her first solo show when she won art competitions three times in a row – in 1983. April likes Ibarra dela Rosa’s artworks, and also was greatly influenced by Van Gogh’s painting style. She had had five solo shows, so far – four in the Philippines and one in Los Angeles, USA. She is now permanently based in California, and is very active in the art scene there. She had joined several group art exhibits, and had lately participated in a collaborative mural painting project with fellow Filipino artists.

The venue for the exhibition is the Philippine Center Lobby at the Philippine Center-New York, 5th Avenue, between 45th and 46th Street, Manhattan, New York City, USA. The exhibit opens on August 1, and will run up to August 12. Viewing hours is from 9am to 5pm daily. For inquiries, please call Victor Cruz, 1212-575-4774.