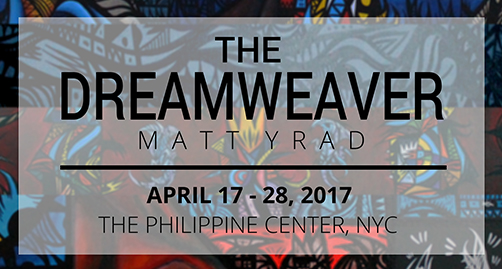 Matt Yrad was born in the Negros Island Region, Philippines, in 1992, and has spent most of his early years in three different cities, namely Dumaguete, Bacolod and Talisay. In 2005, his family moved to California, where he grew into adolescence and was exposed to comics, graffiti and skate culture. In 2013, he moved back to the Philippines to pursue a bachelor’s degree in Fine Arts – Painting and a career in the growing art scene of Bacolod City. He then returned to the United States in 2016 to continue his artistic practice.

His beginnings as a visual artist are attributed to family members well acquainted with art, the influence of video games, comics and western cartoons, as well as the introduction of fiction and folk stories that led to the creation of worlds and characters. He has never considered one place home; by making different places home he has immersed himself in the diversity of cultures and perspectives that have allowed him to hone his craft through the years. With the development of his work was the introduction of spirituality and the synthesis of his eastern folk sensibilities and western philosophies through line, color, and depth.

His works integrate personal derivations of Roman Catholic imagery, tribal history, post-colonial discourse, Filipino folklore, and ancient writing, alongside popular art forms, into pieces that hope to resonate with an audience sharing the same sentiments and convictions. He works in a variety of media such as: watercolor, pen and ink, graphite, acrylic, oil and three-dimensional works. Matt’s awards include: Best in Thesis for Painting from La Consolacion College. He was also Semi-Finalist in the Metrobank National Painting Competition and participated in an exhibition for Art Fair Philippines 2016.