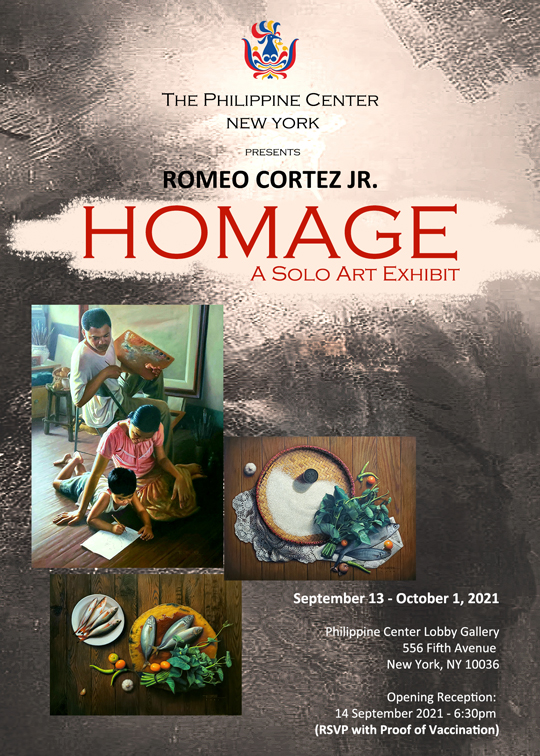 was born in Taytay, Rizal but spent his growing up years in his mother’s hometown, the scenic town of Lucban, Quezon where he developed a love for its lush surroundings and its warm inhabitants.

The youngest in the family of three, Ronald’s mother dreamt of having a seaman for a son. Ronald obligingly finished a course in Merchant Marine but that was the end of that. He never stepped inside a real ocean-going vessel to make a living but instead pursued his real dream. It all started when, during his high school days, a cousin of him gifted him a set of brush and multicolored paints. It got him really excited. The first stroke of that paint brush was the first step towards the fulfillment of his destiny.

With no formal training in the art of painting, Ronal exhibited a natural talent for combining colors and shadows into pictures that mirrored human figures and still life. Sure it was amateurish at first but it was easy to discern that an important talent is emerging.

As a child, he remembered that his mother often times gave him a pencil and a piece of paper for him to be in his upmost behavior and do what he loves to do… to draw! He used to draw school projects for his classmates and do portrait drawings at a very young age. In his college days in Manila, Ronald put his talent to good use, especially when school allowance from the province was slow to come, by doing portrait commissions and selling small paintings to anyone who would care to appreciate them.

Ronald finally decided that this is what he wants to do and really make good at it. To hone his craft further, Ronald hang around a lot with unknown and known painters. The well-known painter Loreto Racuya is one artist whom he acknowledges has a big influence in pursuing his chosen field.

A “realist”, Ronald return to his hometown Lucban every so often and spends a great deal of time in the company of its inhabitants, observing their ordinary daily rituals, and in turn capturing these images unto large canvases of colors, and lines, and shadows. Ronald has developed a flair for depicting traditional family ties, mores and values, and rural lifestyles. This historic town with its large share of century old buildings and houses did not escape the creative eye of Ronald. They too, were transformed and preserved in paintings to last for centuries.

Ronald’s reputation has grown leaps and bounds and this was proven when his name was included in the list of 100 artist chosen from all over the country to participate in the Centennial Celebration of the Philippine Independence at the Cultural Center of the Philippines. Even the National Centennial Commission took special notice of his works and offered him his first One-Man-Exhibit at the prestigious Manila Hotel. Other shows followed like in Boracay, the Holiday Inn in Manila, and at the Shangri-La Hotel in Makati.

His 8th Solo Art Exhibition entitled “Homage” will be showcased from September 13 to October 1st, 2021 at the Philippine Center in New York.