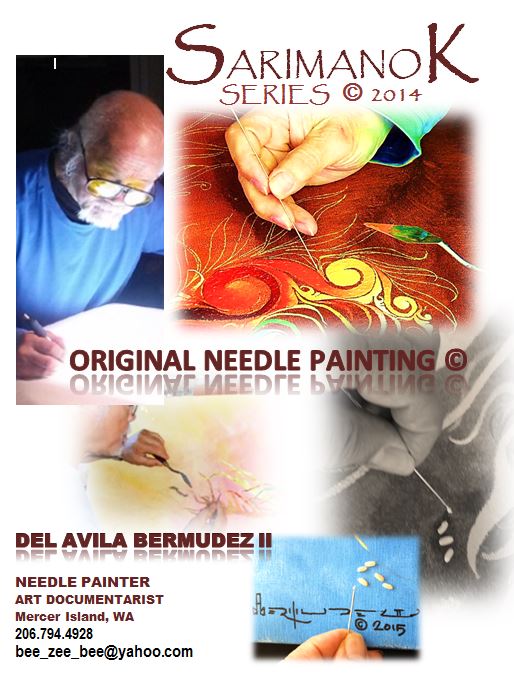 SARIMANOK SERIES 2016
FIRST ONE MAN EXHIBITION
ON THE SPOT DEMONSTRATION DAILY AT 1:00PM

Del A. Bermudez II was born in the Philippines on November 11, 1942 the youngest and only boy of 4 siblings. He finished the degree of BS Architecture in 1969 at St. Louis University, Baguio City, Philippines and migrated to the USA in 1971 to join his parents, sisters & later to start his own family at Mercer Island, WA.

He designed woodcarvings, handwoven fabrics and trend setting handicrafts for their family handicraft businesses in the Philippines and in Seattle, WA. He was awarded a Plaque of Distinction for Outstanding Executive in the Field of Cottage Industry by the Far East Commentators.

He joined the 1964 World Tour of the Bayanihan Philippine National Folk Dance Company & was later appointed as consultant & researcher for the company by the Late Dr. Lucrecia Reyes Urtula, Choreographer and Directress & National Artist in Dancing.

He founded, directed & choreographed Tribal Dances in his dance company The BERMUDEZ KAIBAB TRIBAL DANCE COMPANY which received an Honorary Award in the 1965 BIBAK CAÑAO an annual IGOROT Festival and was choreographer director of various dance companies in the Philippines and USA.

He pursued his art work in Seattle after retiring. Inspired by his affinity to Philippine Handicrafts & research work for the Bayanihan Philippine National Dance Company, one of his art projects in college was The SARIMANOK oil painting and was an inspiration to create a few graphite rendu exhibited as the SARIMANOK SERIES © at the Pagdiriwang Art exhibition, Seattle Center, WA on June 2014. A self-taught artist, he later pursued it in oil.

The use of palette knife or brush was restrictive in most of his strokes which motivated him to research for an instrument to achieve his painting requirements. A sewing needle was the instrument of choice to render his oil paintings, thus the birth of the ORIGINAL NEEDLE PAINTING © & Del II is THE NEEDLE PAINTER.

The SARIMANOK SERIES © goes on in a variety of compositions of birds in flight, flowers, butterflies and fishes.

He was inspired by the legendary bird of the Miranao of Lanao, from the south Island of Mindanao, Philippines called SARIMANOK. Southern art is prevalent of floral images in their weaving, wood carvings & metal arts which inspired Del in creating his SARIMANOK ART.

The legend of SARIMANOK was a spoken story about the Sultan celebrating his daughter Princess SARI’s birthday when a giant bird swooped down, scooped the princess and vanished forever. The Sultan declared that his daughter whose elegant beauty will be immortalized as a magnificent bird whose omnipresent image will be used in every art. It is said to be a symbol of good fortune.

He depicts her in glorious, magniloquent, iridescence in profuse graceful scrolls of leaves, flowers and spiral vine motifs with warm harmonized traditional colors and patterns.

He has modeled his SARIMANOK SERIES © by incorporating the rich flora of the Philippines which compliments the traditional floral paintings, hand woven fabrics, ornaments, wood & metal works, with bright hues in harmony & expression of the colorful traditions and culture of the Philippines.

Dedicated to the MIRANAO of LANAO 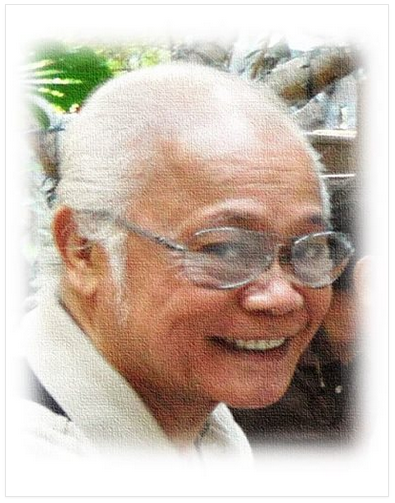