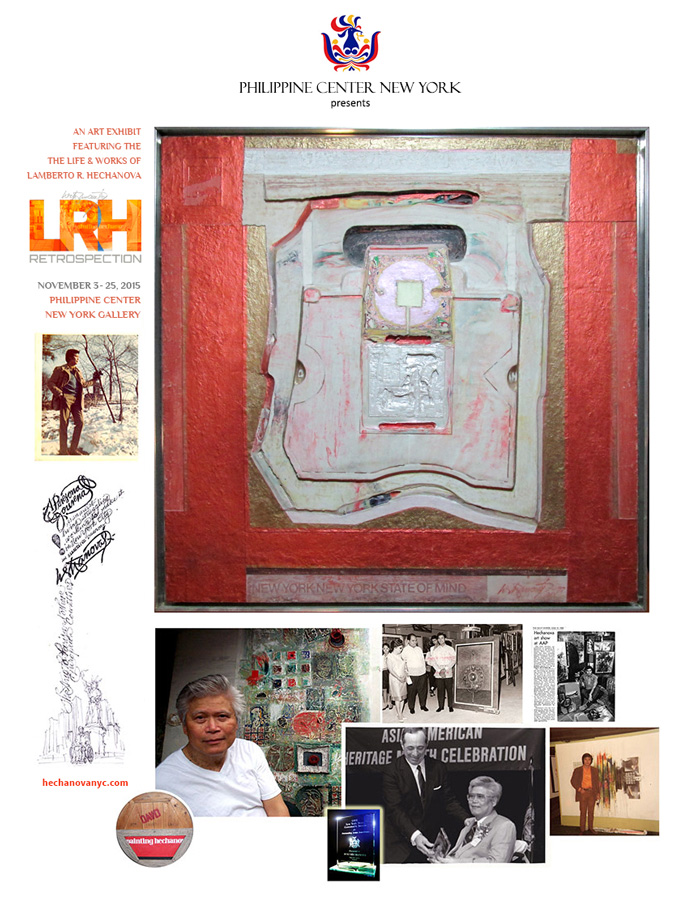 An upcoming art exhibit entitled ‘LRH Retrospection’ will be launching on 3 November 2015 at the Philippine Center New York Gallery as a tribute to the award winning artist and sculptor, Lamberto R. Hechanova Jr.

The exhibit will feature the artist’s life and works spanning six decades, from 1965 until his death in 2014.  The show will also display memorable pictures and news articles defining the artist’s milestone,  success and achievements in arts. Highlights from this collection will include artworks from the 1960’s and Lamberto’s award- winning works from the Philippines, Baltimore and New York. This exhibit promises to showcase Lamberto‘s originality, and the progression of his approach in his prize-winning art styles and techniques.  It will also showcase the 2 artworks of the artist which was acquired in 1974 to form part of the art collection of the Philippine Center.

A rare talent, he excelled both in Sculpture and Painting.  Lamberto is truly a source of pride to any Asian American as he wholeheartedly represented the best in visual arts, from his roots in the Philippines to the bustling art scene in the USA.. In 1993, he was awarded the Most Outstanding Asian American in Art by the late New York State Governor, Mario Cuomo.

The exhibit opening reception will be on Tuesday, 3 November 2015, at 6.30pm.  The show will be held symbolically at the Philippine Center New York Gallery located at 556 Fifth Avenue, between 45th and 46th Streets.  The exhibit will run for 2 weeks until 25 November 2015.  For more information on the artist, visit his website at www.hechanovanyc.com or follow @hechanovanyc on instagram.