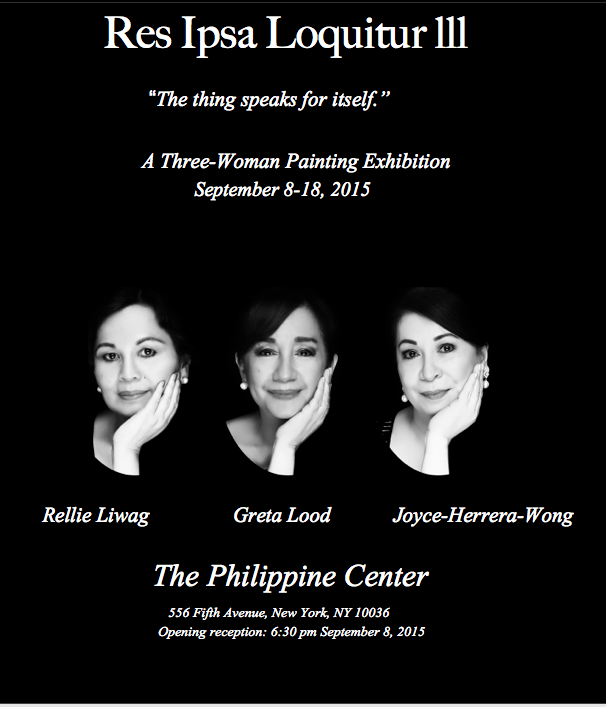 Rellie Liwag finished a degree in Bachelor of Arts, major in Communications Arts, from Maryknoll College (now Miriam College). After college, she had a stint as a model for the country’s leading fashion designers Pitoy Moreno and Auggie Cordero. Migrating to the United States, she worked for 5 years at Mckinsey & Co., Inc. as a visual aids specialist. She then moved to ITT Sheraton, North America Regional Office in Los Angeles as Administrative Assistant for the Regional Director of Human Resources.

Rellie had studied oil painting before relocating to her home country after 18 years spent living in the United States. She initially joined the Guevarra group of artists under Galerie Joaquin, and was mentored by Andi Cubi and Gig de Pio, both veteran artists for representational genre. She also studied with Japanese artist Harumichi Sakata in 2005. The same year, to continue honing her talents, she enrolled at the Art Students League in New York under the tutelage of renowned artist Robert Cenedella. In 2007, she enrolled once again in the same institution, simultaneously, at the National Academy of School of Fine Arts also in New York. In 2012, she attended the workshop of hall of famer and well-renowned artist Daniel Greene in his studio in North Salem, New York. A year after, Rellie enrolled at a studio Incaminnati in Philadelphia, whose founder is Nelson Shanks, another well-renowned artist. In 2014, she attended a Plein Air Workshop in Burgundy, France with Costa Vavagiakis, a mentor from the art student’s league.

Rellie has had a solo exhibit in Galerie Joaquin in Metro Manila entitled “Faces, Bodies & Places, and a second solo exhibit at the Philippine Center in New York City entitled “The Land of My Birth”. She has participated in a number if group shows in recent years. 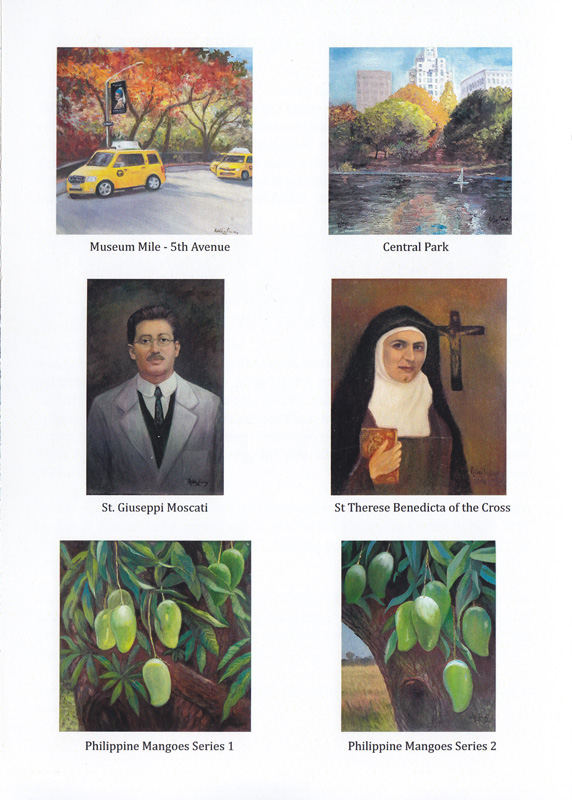 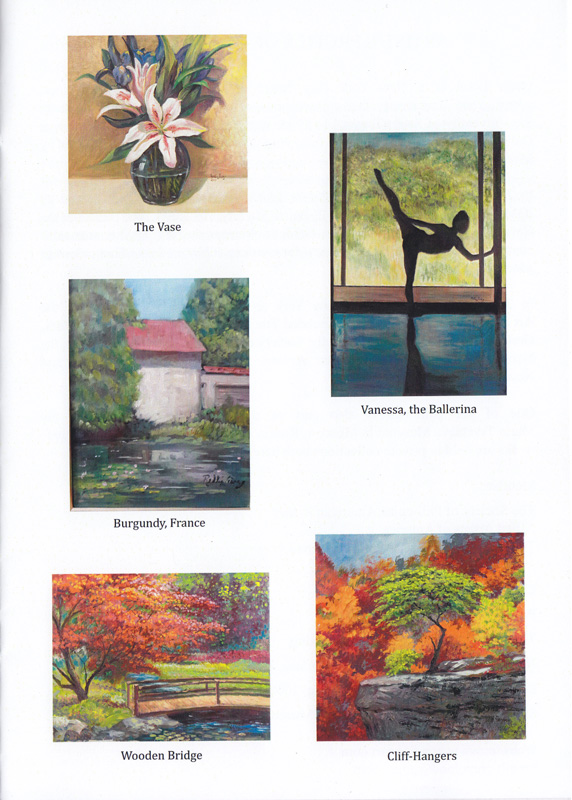 “I have always wanted to be a visual artist but did not believe in myself. Whenever I would go to a museum, I would at times be teary-eyed especially when I viewing the works of Vincent Van Gogh, while simultaneously listening to a handheld audio equipment. I identified strongly with him, his passion and insistence for truth. He did not want plasticity, he was misunderstood, but he kept on. The way he viewed life never failed to touch my heart. To this day, his profundity continued to move me.

The opinions of others I placed value in and I allowed said opinions to affect me at time; but getting into my art freed me from that. In the beginning, I received numerous criticisms – you are too old, you did not major in fine Arts, but I stayed focused and just kept on fuelling my relentless and unstoppable passion for art. Now people tell me if I could do it then maybe they could too and I say, “of course”.

I am happy in the constant discovery of myself and my art – a certain stroke, a certain color, you finally get it and it feels great – you become a more confident, more mature. There is just so much beauty around us. We just have to find it. When I have problems, I turn to art and I see beauty. I believe that art is one way by which God is getting through to us. There is added meaning in my life now, a certain spirituality that nourishes me. My life is a canvas filled with bright, happy colors.”

Greta Lood is a New York based artist, born in the Philippines, where she received her Bachelor of Fine Arts Degree from the University of Santo Tomas. In 1998, she presented her first solo exhibit at Gelleria Aurora in Makati, and the following year her second show was opened by Madame Imelda Marcos.

In 2003, Greta moved to Boca Raton, Florida where she was represented by IOMA Art Gallery and Down 2 Earth Gallery. In 2006, she became the Curator of Exhibitions for the Gardens Memorial Park. She was also commissioned to do a 11’ x 12’ mural for Gardens’ lobby, and six of her paintings adorn the salon.

In 2008, Greta relocated to New York as a full time artist, attended the Art Students League of NY, and founded The Plein-Air Painters of Central Park. Greta has exhibited in – group with the Society of Philippine – American Artists, the National Association of woman Artists, the Art Student’s League and New York Realism.

One of her paintings is also part of the permanent collection of the Maria Tsvetaeva Museum in Moscow, Russia. More than 100 of Greta’s original works are held in private collections both here and abroad. 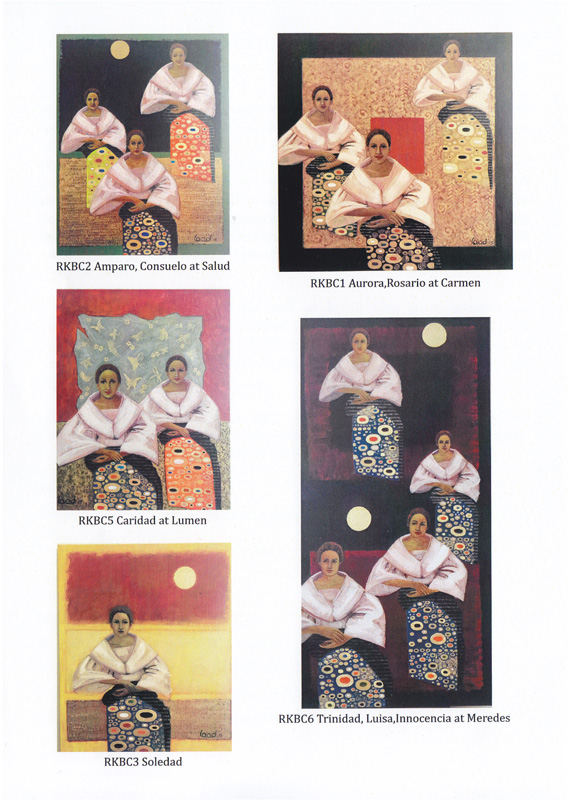 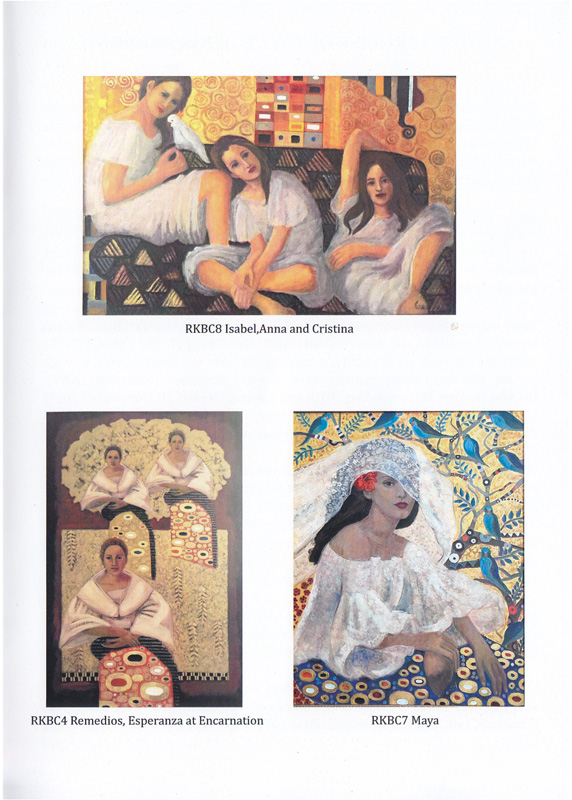 “I call this series RKBC, which represents inspiration drawn from the works of my three favorite masters . . . Mark Rothko, Gustav Klimt and Ben Cabrera.

I am fascinated by the minimalistic abstraction of Rothko’s color fields, especially the muted black, bright yellows and shades of red. By superimposing, in bold strokes, BenCab’s characteristically repetitive figures in traditional Philippine garb (circa 1900), yet adorned by Klimt’s opulent gold circular designs in two dimensional form, I hope to provide the viewer with an interesting counterpoint between the modern century and a time gone by.”

Joyce first held a painter brush in 1986 when her family was based in Taiwan. She was introduced to the world of Chinese watercolor painting where expressive calligraphic brush lines were the chief means employed to animated objects. While in Hong Kong in 2007, Joyce started to learn the Classical realism Technique that was perfected by the old masters and she found her niche, She loved the depth , beautiful light effects and details of colors that this technique showed.

Together with other like-minded artists, Joyce is one of the founding members of Pintura Circle, an art of charity group based in Hong Kong. She was the group’s first President. Pintura Circle had successfully launched Artruism I (October, 2012) at the Hong Kong Visual Arts Center and all proceeds were donated to kids International Ministry, And Artruism II (April,2014) where all proceeds from the exhibit provided 16 fiberglass boats to the fishermen in Leyte who were affected by Typhoon Haiyan.

Joyce’s last exhibit was held at the Prince Marco Polo Hotel on June, 2014 where she was one of the Flipino artists invited to showcase their artworks. She donated the proceeds of her sales to Kids International Ministry and Kartilya Foundations. During her last four exhibits, Joyce’s works were well received and complete sold out. Her works are now in the home of collectors from Hong Kong, San Francisco, Los Angeles, New York, Memphis, London, Vancouver, Bangkok and Manila. 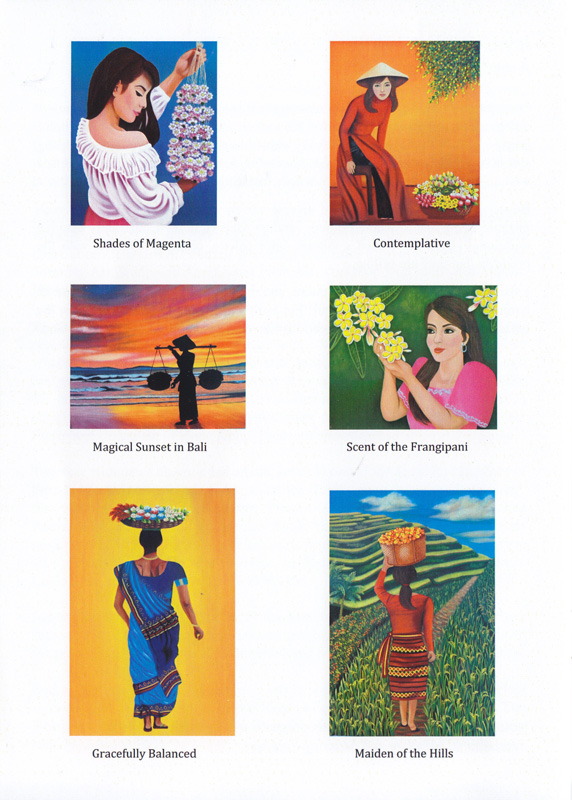 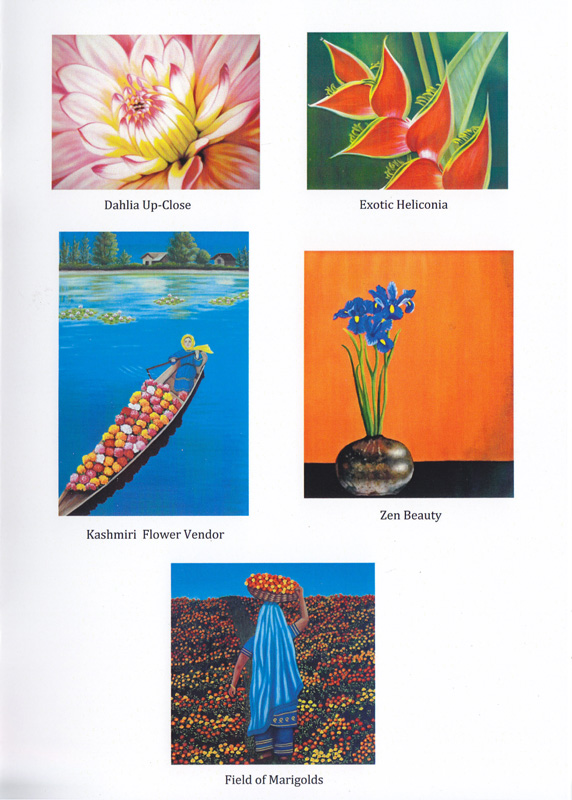 “Art, for me, serves as a means of opening our eyes and appreciating the wonders and beauty that this world can offer. No matter what my state of mind is when I create a piece of art, I aspire to life my viewer to another place, in a surrounding thatis both aesthetically pleasing and peaceful. And by executing my thoughts, I wish to induce an emotion that is not only inspiring, but blissful as well.

Beauty can be found amongst the diverse variety of the human form, one such instance being that of woman flower vendors. Garbed in their intricately detailed traditional costumes, I used a vibrant color palette, creating harmony with the products that they are selling.

I also find fruitful inspiration in nature, and the limitless possibilities that can be harnessed by creating works of art. For isn’t it true that to contemplate on the beautiful wonders of the natural world is like engaging in a symphony with God?”