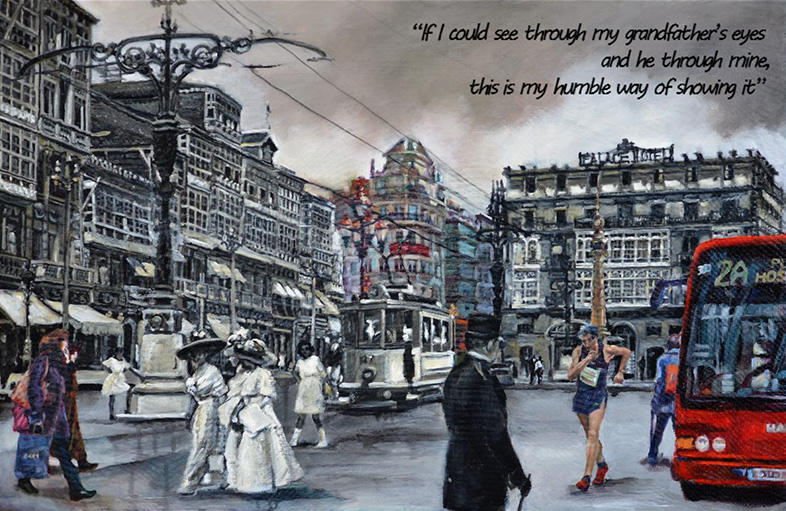 In 2004 Isabel left for Europe and settled in the Canary Islands in Spain. From there she continued to win awards and exhibit in Madrid and Barcelona, Sweden/ Stockholm, London, Riga/ Latvia, Brussels/ Belgium, Enköping /Sweden, Bogota /Colombia, Cartagena/ Dominican Republic, not to mention the constant mainstream exhibitions in Miami and New York. She also curated Chel Gallery in Gran Canaria, gave private art classes in her studio. With her much acclaimed “Faces/Rostro” portraits, her collectors and clients include several state offices and museums in Spain and the Philippines.

In 2012 she began her series In Parallel Time, a series of oils with a registered concept of the fusion of the past and the present in one same scene, the past in blacks and grays and the present in color, a series that has appeared in several publications in Europe and The United States. That same year, she collaborated with Holzweiler Fashion Agency in Oslo, utilizing seven of her series printed as shawls for their 2012 autumn/ winter and 2013 summer/ spring collections of which clients included the royal family. Since then she has shown the series in the Canary Islands, Sweden and Manila with the intention of adding to the series as she continues to exhibit in different cities of the world. She is scheduled as an invited solo artist in Madrid and Lisbon in 2019 as well as in Manila for In Parallel Time Asia. In October , she will be exhibiting her collection of paintings and selected Holzweiler scarves at the Philippine Center on 5th Avenue in New York City. Her art book Crossing Parallels will be launched at opening ceremony.