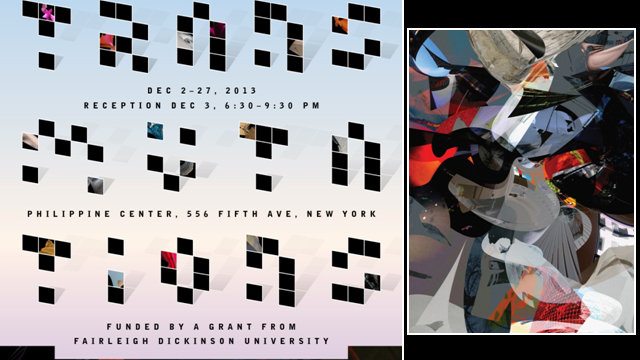 Funded by a grant from Fairleigh Dickinson University, ‘Transmutations,’ an exhibition of approximately twenty medium size digital prints by visual artist and computer graphics faculty member John Cinco will be on display at the Philippine Center gallery from December 2 through 27, 2013. The pieces, consisting largely of recent works created in Adobe Photoshop, seek to explore the creative and artistic potential latent in everyday photographic images—all of which were taken by the artist as well as his wife and daughter as they document quotidian life events at different times and places.

The results are digital collages that are far removed from the images recorded by the camera. Mundane pictures which were once recognizable are now unrecognizable, having undergone a series of transformations that now emphasize their basic visual properties. Shapes, colors, lines and textures are reborn fractured but reassembled and synthesized into new entities that reveal a different but compelling reality on a two-dimensional plane—images that attempt to evoke the sacred yet real, the otherworldly yet palpable—evincing the metaphysical possibilities inherent in the prosaic.

John Cinco was born and raised in the Philippines and presently lives with his wife, Vicky, and daughter, Rain, in Richmond town, Staten Island. He earned his BFA in Painting from the University of the Philippines at Diliman and an MFA in Computer Art from the School of Visual Arts. He is also an alumnus of the Philippine High School for the Arts at the National Arts Center in Laguna. John has had several exhibitions, both in brick-and-mortar venues as well as online, in the Philippines, Japan and the United States. For the past 13 years, he has been teaching as a Professor of Computer Graphics in the Visual and Performing Arts Department of Fairleigh Dickinson University, College at Florham, in Madison, New Jersey.