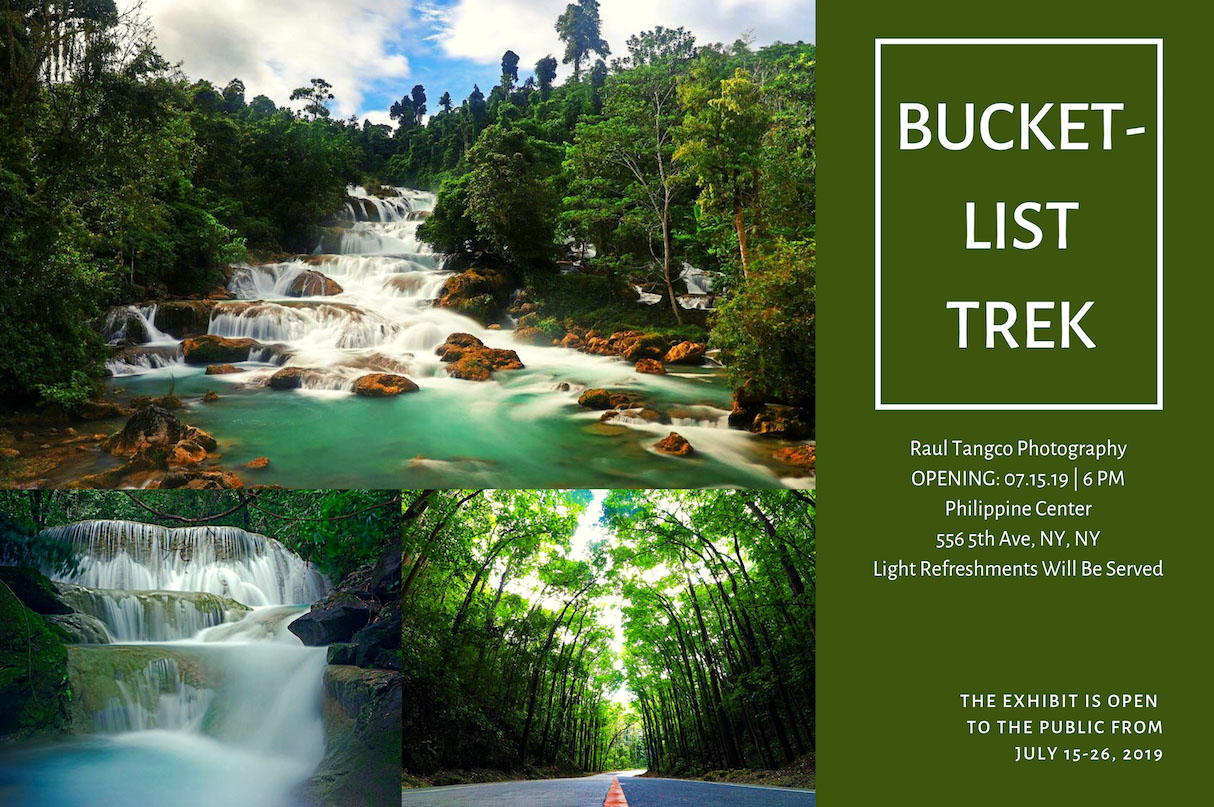 As an archipelagic country with over 7,000 islands, it is no surprise that the Philippines is Famous for its beautiful beaches. Curious travelers, though not many, have discovered that the fine sands and glorious tropical sunsets are but a gateway to the country’s most spectacular natural wonders.

Photographer Raul Tangco takes you into dense forests where landscapes and waterfalls are as mysterious as they are life changing. Seven (7) magnificent locations that are often the subject of local folklore are presented in this exhibition through twenty-four (24) photographs.

The journey begins in Luzon, the largest and northernmost of the three island-regions of the Philippines. Here, waterfalls are central to local culture, including community celebrations and family gatherings. One of the region’s best views can be found in Hulugan Falls, where a rainbow appears above its basin every afternoon.

In the Visayas, the central part of the country, hidden gems like Kawasan Falls are gradually becoming popular among courageous travelers who enjoy extreme adventures like canyoneering or jumping from the steep parts of the mountain into the deep turquoise waters.

In Mindanao, the southernmost part of the Philippines, are unexplored waterfalls that are said to be the most beautiful in the country. Many of these are frequented only by indigenous people who have mastered the perilous terrain, such as Aliwagwag Falls, the tallest waterfall in the Philippines; and Asik-Asik Falls, a magical curtain of water flowing gracefully over a wall of foliage

In his most challenging expeditions, nature photographer Raul Tangco has captured spectacular images of waterfalls and landscapes in the lesser explored areas of the Philippines. The collection includes twenty-four {24] photographs of amazing wonders of nature representing the archipelago’s three main Islands of Luzon, Visayas and Mindanao.

Raul is a customized framing service provider by profession and, for almost three decades, has been a trusted professional custom framer and curator of various artist, painters and photographers and even business offices and known restaurants in the country needing this type of service. Nearly half a century after purchasing his first camera, he unveils his first
solo exhibition.

Raul started to dabble in photography in high school, setting up his own dark roam where he learned to develop film and print pictures. Deepening his knowledge and passion for the craft, he became photo editor of the school paper while studying industrial engineering at the University of Sto. Tomas in Manila.

In 1986, he joined The Camera Club of the Philippines, the oldest and most prestigious photography society in the country. To this day, he Is among the club’s most active lifetime members.

For the next phase of his photography journey, Raul looks forward Io showcasing images of century-old Philippine churches.